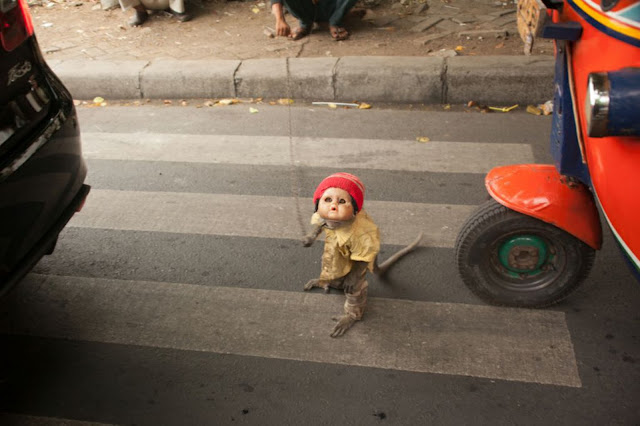 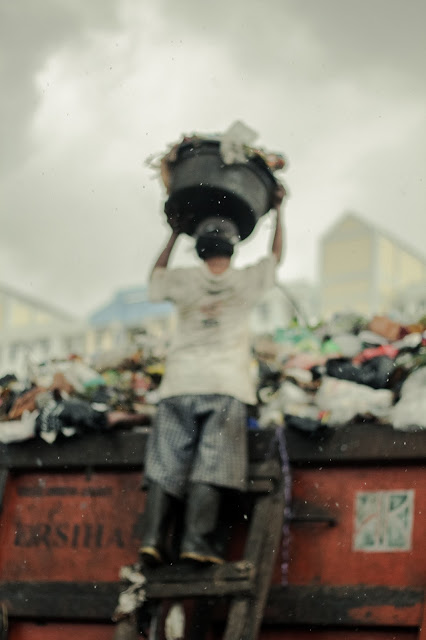 Moeka Djakarta is a photographic exposition of Jakarta as seen through the eyes of three young men: Nicholas Hilman, Nicholas Raditya Santoso, and William Tan.

Driven by passion for their work and for their city, what began as little more than a school Personal Project assignment quickly outgrew its origins to become a photographical testament of Jakarta in both the past and present tense.

Aiming neither to praise nor to criticize, Moeka Djakarta seeks only to portray Jakarta exactly as it is seen in everyday life by its many inhabitants. From the lowly slums to the skyscraping office complexes, from the dank landfills to the glamorous malls, from ancient Dutch buildings to modern contemporary architecture, Moeka Djakarta is meant to depict the true essence of the city of Jakarta, an essence which in our belief is often unacknowledged by the public.

In this sense, Moeka Djakarta is truly unprecedented in scope, goal, and execution. In scope, because the photographs contained within it portray nearly every niche of life that is found in Jakarta. In goal, because this photographical depiction of this nation's capital is meant solely to present a clear picture of the city's current condition, without being mired in political or social agendas. In execution, because it was accomplished not by professional photographers and artists, but by three talented, dedicated and hardworking teenagers, who aim to dispel the notion that such level of artistic expression is limited only to adults. 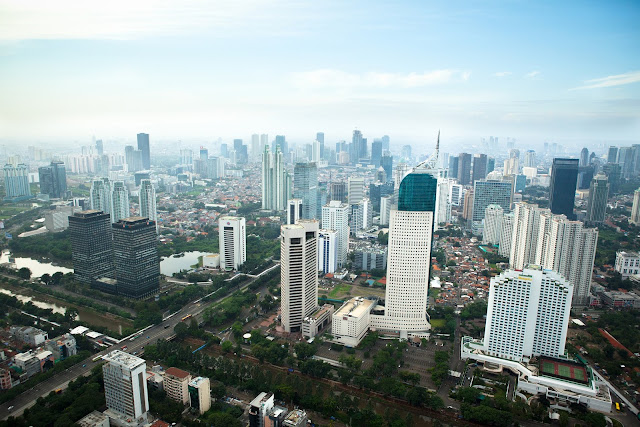 Our story
It all began with a tenth Grade project, where each student was required to complete a yearlong project as our final assessment. We had the opportunity to create anything we pleased without any barriers, and thus, the possibilities were endless. Coincidently, we are all photography and design enthusiasts, and with that, we decided to unite our interests and develop it into a photo book.

However, what started as a school project became a pursuit of a greater dream. We wanted to take this project to a different level. It occurred to us that very few coffeetable books were ever published about Jakarta in its current state. Lengthy texts and lifeless photos are the common form of expressing the true face of our beloved city.

Jakarta is the melting pot of Indonesia, where the diverse cultures in Indonesia coalesce, and it is this idea we wanted to capture and embody in a meticulous highend coffee-table book.

Yet, the fuel of our motivation did not end there. Our ultimate vision in creating this photo book is to set a prime example that would drive the youth of Indonesia to strive for higher dreams. Many teenagers choose to rather spend time not being productive and nonchalantly hang out at malls instead. We believe they are detrimental to Indonesia’s future, which is why one way of moving our country forward is to motivate and broaden the horizons of these teenagers. Learning rudimentary skills at school simply would not suffice. We wanted to prove to them that they could achieve so much more with the time and resources they have. We young people are capable!

And we certainly did not fall short of that vision.

Bio
Nicholas Hilman, Nicholas Raditya Santoso, and William Tan, are three aspiring highschool seniors attending Sekolah Pelita Harapan, who are driven by passion for photography, design and their city. Aiming to inspire young people in Indonesia to dream and achieve greater things, as well as to raise public awareness of the current state of the nation’s capital, these three young photographers undertook what was seen as unlikely by many and created their very own photographic testament of Jakarta. They transfigured what began as a school assignment into a published work of art, Moeka Djakarta. Curatorial: A visual narrative uncorrupted by experience. By Martin Westlake
“The meaning of quality in photography’s best pictures lies written in the language of vision. That language is learned by chance, not system; … our overwhelming formal education deals in words, mathematical figures and methods of rational thought, not in images.” Walker Evans, London, 1977.

Some 160 years ago, two British photographers – Woodbury and Page – became the first to photograph Jakarta. Then known as Batavia, the city would later become the capital city of Indonesia. The subjects of their sepia-toned albumen silver prints were of buildings, street scenes, and studio portraits of expatriate families and officials. J.A.

Meessen, a Dutch photographer working for the Netherlands Topographical Bureau, was also one of the first to document government buildings, as well as the prestigious accomplishments of the Dutch in the East Indies. 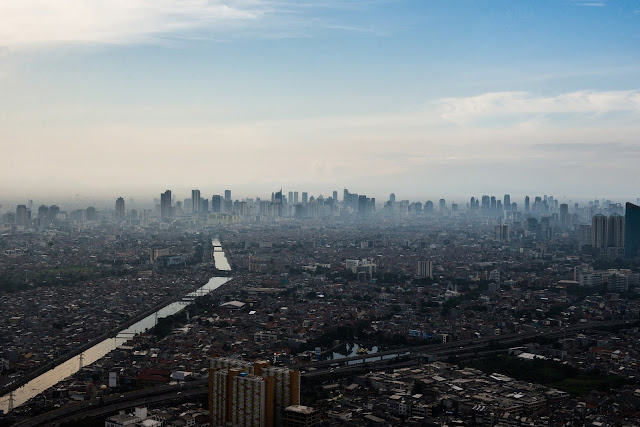 Much has changed since the pioneering days of the Victorian travel photographers – particularly the development of digital camera technology, which now gives photographers the freedom to shoot handheld day and night. Jakarta, too, has also changed considerably. Residents have observed Jakarta’s skyline transform — from a well-planned Dutch ‘garden’ city into a one of the largest and densely-packed cities in the world; it is over-populated, grid-locked, and polluted. It is no longer a beautiful nor a romantic place. 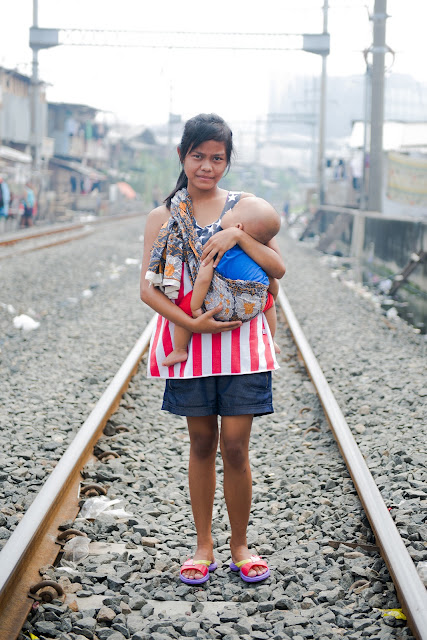 In June 2010, Nicholas Hilman, William Tan, and Raditya Santoso, three 15 year-old high school students from Sekolah Pelita Harapan, began photographing Jakarta as part of a yearlong personal project. All three were interested in graphic design and had a deep passion for photography. Inspired by many photo books in bookstores, they became determined to publish a book focused on their hometown. Some may consider Indonesia’s capital city to be a difficult place to photograph, but Hilman, Tan, and Santoso have skillfully managed to reach beneath the chaos and blandness of Jakarta’s surface by selecting their subjects with great care and attentiveness. Seeing the city through three different pairs of ‘eyes’ gives greater depth to this collection of photographs and allows for a broader view. Though still young and in the process of learning photography, these young men have produced a fine set of images.

For instance, Hilman’s image of cyclists on Jalan Jenderal Sudirman shows Jakarta’s main street devoid of traffic on a car-free day: a rare, quiet moment on the usually busy and grid-locked thoroughfare. Tan’s photograph of two nannies walking their employers’ huskies in a housing complex appropriately gives an insight into the world of the Jakarta’s rich. Raditya’s shot of the kitsch creations of Jakarta’s property developers, taken from the rooftop of a huge shopping mall, could have misled anyone that the image must have been shot anywhere — including Saudi Arabia!

The most remarkable characteristic of the work of these teenage photographers is undoubtedly their clear vision. Their images are fresh and dynamic, managing to present a unique view of one of Asia’s most important cities through their youthful eyes. Jakarta as seen through the eyes of teenagers may be a naïve vision, but the concept creates a visual narrative uncorrupted by experience or encumbered by technicality.
Posted by Burhan Abe di Thursday, June 13, 2013