Shangri-La Hotel, Jakarta invites food lovers to share a passion for the culinary arts at the Shangri-La International Festival of Gastronomy from 25 to 29 October 2016 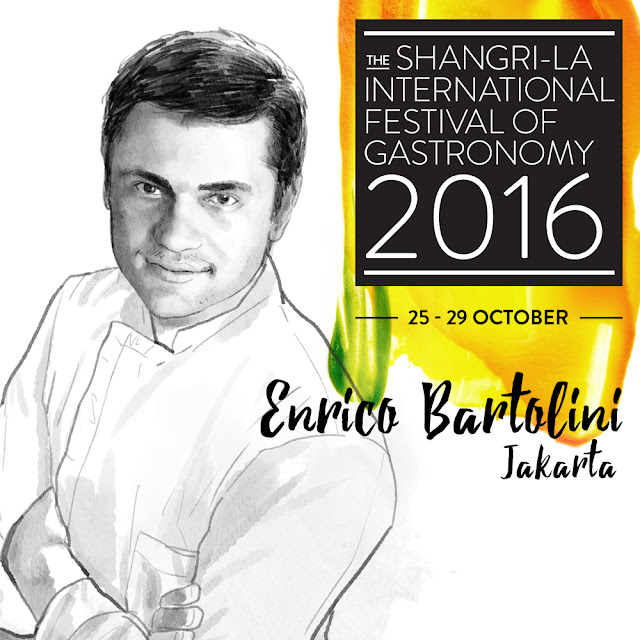 Shangri-La Hotel, Jakarta will take part in the excitement of the acclaimed Shangri-La International Festival of Gastronomy by presenting the Michelin two-starred Chef Enrico Bartolini, who will travel from Devero Restaurant in Milan, Italy to showcase his unique menu at Rosso, the hotel’s Italian restaurant, from 25 to 29 October 2016.
The festival will celebrate an illustrious line-up of 12 chefs at 11 Shangri-La hotels. The 12 chefs – three of whom have restaurants listed in The World’s 50 Best Restaurants – will headline Shangri-La’s culinary event.
The festival is on its second running since its first inception in 2015 and will be simultaneously launched at 11 of the group’s hotels in 10 cities: Beijing, Hong Kong, Jakarta, London, Manila, Paris, Taipei, Tokyo, Shanghai, and Singapore.
Returning to the gastronomy festival for the second year, Chef Bartolini will present his flawlessly executed contemporary classic cuisine that is inspired by the past and present. His dishes are intensely flavoured and aesthetically perfect for photography. Born in 1979 and brought up in Pescia, in the province of Pistoia, Chef Bartolini is lauded by food and wine critics as one of Italy’s most talented young chefs.
Chef Bartolini honed his culinary craft across Europe under world-class masters, such as Carlo Petrini, Mark Page and Massimiliano Alajmo, before taking up creative direction of Le Robinie Restaurant. Since 2010, he has been at the helm of the Devero Restaurant and Dodici 24 Quick Restaurant in Cavenago di Brianza, near Milan.
He received his first Michelin star when he was just 29 and his second at 33. Along with three Gambero Rosso forks and three L’Espresso Guide chef hats, the stars sealed his reputation as an internationally renowned chef.
Ever enterprising and imaginative, Bartolini has collaborated on a variety of culinary projects, including partnering with Krug Champagne on its ‘pop-up’ restaurant in Italy, developing a menu for first-class travellers on the airline Emirates, launching a line of beers with the Angelo Poretti Brewery and working with fashion brand Hermes to create dishes for its collection launch in Milan. In 2014, Bartolini developed the menu for Hong Kong’s first regional Italian concept restaurant called Sepa.
Chef Bartolini’s style is contemporary classic – a merging of modern innovative culinary techniques and traditional culinary values. This gastronomic merger of present and past to create original flavours has led to Bartolini being described as innovative, balanced and meditative.
Chef Bartolini’s creation can be enjoyed during lunch and dinner, with prices start from IDR398,000 (US$30) and IDR1,098,000 (US$83) including pairing wines. For more information on Chef Bartolini’s visit or to make a reservation, please contact (021) 2922 9999 or email to [email protected]
Information on the menus, prices and chefs will be available on ShangriLaLovesFood.com from 1 September 2016. Reservations for each event can be made at the individual hotel’s website at www.shangri-la.com.
About Shangri-La International Festival of Gastronomy
The Shangri-La International Festival of Gastronomy, co-sponsored by evian® and BADOIT, will spotlight the chefs’ remarkable talents and techniques as they elevate guests’ dining experiences through culinary artistry and excellence from 25 October to 1 November 2016. Join the excitement of the worldwide week-long culinary festival celebrating 12 world-acclaimed chefs: Frédéric Anton, Stefano Baiocco, Mauro Colagreco, Ip Chi Cheung, Samuel Lee Sum, Virgilio Martinez, Mok Kit Keung, Christophe Moret, Giancarlo Perbellini, Gaetano Trovato, and Mitsuharu Tsumura. This year, the festival will be simultaneously launched at 11 of the group’s hotels in 10 cities: Beijing, Hong Kong, Jakarta, London, Manila, Paris, Taipei, Tokyo, Shanghai, and Singapore.
About Shangri-La
Hong Kong-based Shangri-La Hotels and Resorts currently owns and/or manages 98 hotels under the Shangri-La brand with a room inventory of over 40,000. Shangri-La hotels are five-star deluxe properties featuring extensive luxury facilities and services. Shangri-La hotels are located in Australia, Canada, mainland China, Fiji, France, Hong Kong, India, Indonesia, Japan, Malaysia, Maldives, Mauritius, Mongolia, Myanmar, Philippines, Qatar, Singapore, Sultanate of Oman, Taiwan, Thailand, Turkey, the United Arab Emirates and the United Kingdom. The group has a substantial development pipeline with upcoming projects in mainland China, Cambodia, Hong Kong, India, Malaysia, Myanmar, Saudi Arabia and Sri Lanka.
Share
Facebook
Twitter
Pinterest
WhatsApp
Previous articlePenfolds Saint-Louis Collaboration
Next articleDa Maria Membawa Pesona Pantai Amalfi ke Bali

A Culinary Trail Journey at Buahan, a Banyan Tree Escape

A Culinary Trail Journey at Buahan, a Banyan Tree...

Conserving Traditional Balinese Cuisine and Foraging in the Wild with Local Communities Buahan, a Banyan...

Toast the sunset, drink the view! Perched high above the palms on the famous Kuta...

Make this choice and from now on, you will forever be a part of every adventure!